I wanted to add another country to my list of where I have run…so why not run with the Buckingham Guards in Hyde Park?

If you want to see some of the historical sites, scroll down to the bottom for those links! 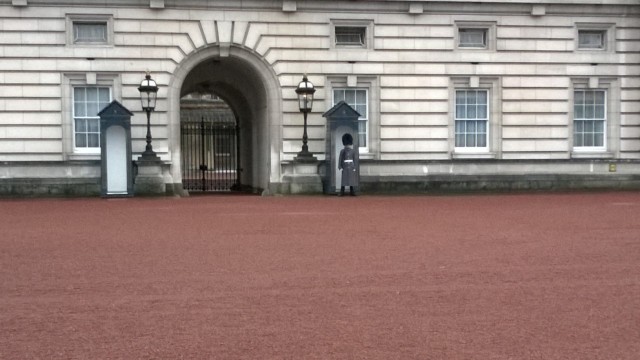 Now here is a tip: I did another run at 5:00 in the morning the next day…there are NO palace guards in site or in their spots.  They only show up for the tourists!

If you are lucky, you can catch the royal cavalry as well as running partners.

Sorry I was limited with the picture quality as I use my Windows 8 Mobile phone as my running camera and podcast player. 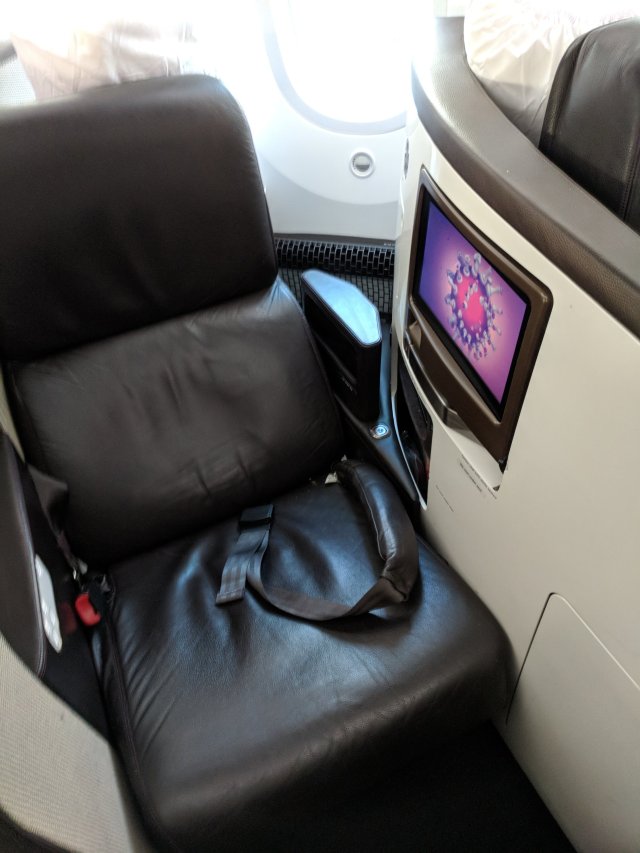 Let me go back to the start.  I flew to London today and wanted to try out and evaluate Virgin Atlantic versus the normal Delta flight(s) I take.  It was a mixed story IMHO.  First, they have great seats which are much more comfortable for sleeping, but you almost need an attendant to help you set them up and take them down. 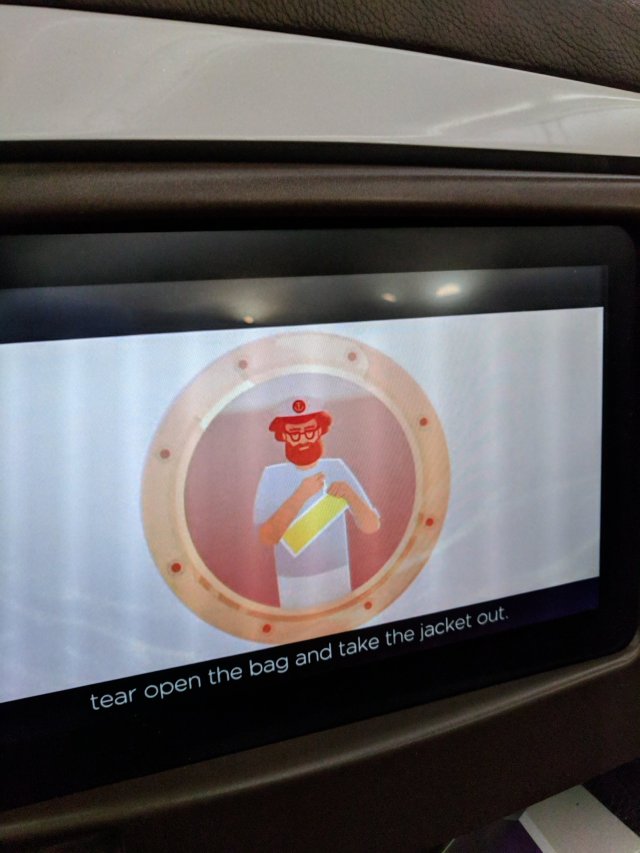 They do give you very comfortable pajamas to sleep in and their pre-flight videos are quite unique and humorous.  But…I thought the food service and food quality was not as high quality as Delta and the service was somewhat disappointing.  I almost began to fear to ask for anything…it might have been my American english not translating to the proper Queen’s english with the British staff.  I will update this eval after my trip back if anything changes. 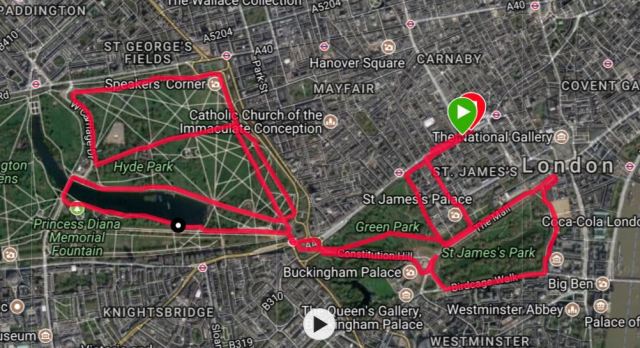 Back to the run.  It was quite fun to run around central London.  I had to control my temptation to stop and take more pictures. 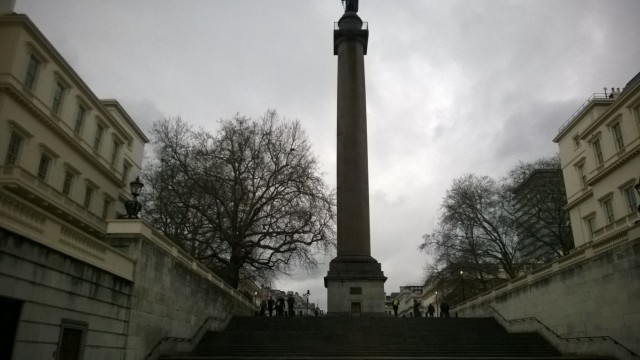 Trafalgar Square was popular with many tourists.

But not as popular as Churchill’s War Room which had HUGE lines for people standing in the rain.  It must be due to the recent movie about Churchill, but I could be wrong.

2019 Update:  I did visit the Imperial War Museum by booking online in advance.

It is a balance of seeing the bunker rooms and the overall Churchill Museum.  It had some of his famous hats…and I learned that Churchill loved French champagne and drank it daily… 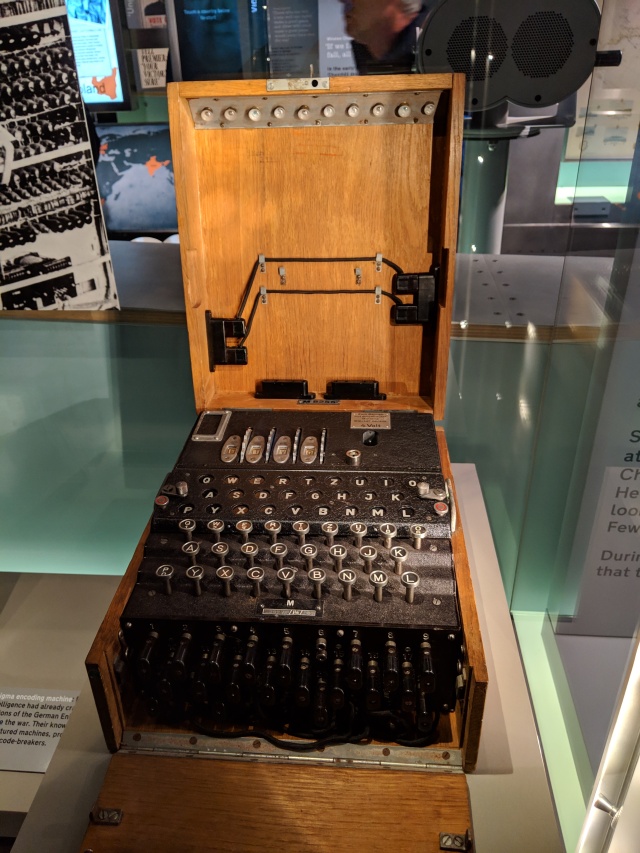 They even had an original Nazi Enigma machine that was used to decrypt messages on a daily basis.  That was a surprise.

Lots of history here and some of the rooms have all the original maps and files that were not moved or changed after the war ended.

Worth a visit!  If interested, the Imperial War Museum also has an enigma device and has absolutely free entrance!  Only about 15 minute subway ride away.

Now, let’s go back to running around the parks…

Both Green Park and St. James Park were fun to run around.  Many historical sites and wildlife.  The local dogs chased these ducks/geese off about 30 seconds after I ran by.  The local dogs were having a blast chasing birds.

Most of the local runners were all in Hyde Park of course.  And there were some really fast runners that were hard to keep up with.  I guess I should have packed an extra Gu for some race pace speed work!  The swans were VERY friendly and will come right up to you.  So friendly, it was scary.  It was hard to tell if they would draw you in with their friendly demeanor and then attack at the last second like the movie “It” that I saw on the plane…

If interested, here is my extended lunch hour that I took a train out to see Bletchley Park.

Or if you love military history, check out my visit to the Imperial War Museum.

OK – in closing, if you are staying in London in Piccadilly Circus area for a conference, you know where to go running now!  Time to finish my afternoon tea now.  Yes, it is with milk.  Have to be proper here in London 😉