Unlike Vietnam, South Korea and North Korea are not united and that fact is still very overt and disappointing when talking to local people. The (SOUTH) Korean is clearly very strong and it was obvious when visiting Seoul. There was always enormous activity, action and energy everywhere you went. The traffic was brutal though, 20% of the entire country lives in Seoul (10 million people). We only had two days left in my vacation balance, so we prioritized our time to head north and visit the DMZ.

It was amazing (and scary) that the border and cease fire line (the 38th parallel) is only about 1 hour north of the capital.

Almost the entire time you ride/drive along the river, there is double layers of razor wire and armed guards in observation posts every 50-100 meters. 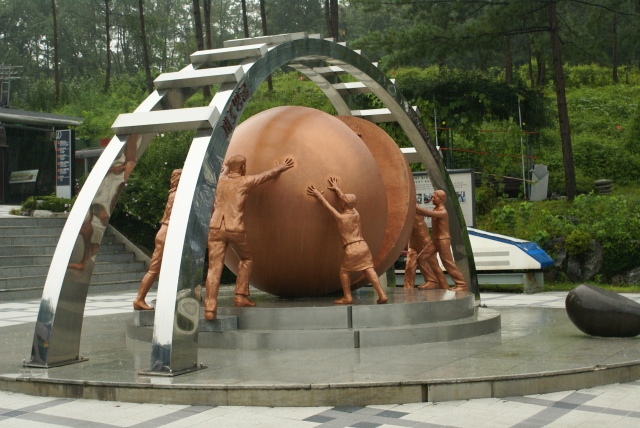 We first checked out the “third tunnel” which was found in 1978 as a potential invasion tunnel built by the north. Unfortunately, we could not take pictures, (http://en.wikipedia.org/wiki/Third_Tunnel_of_Aggression) but we hiked down 75 meters to crouch the 250 meters to reach the very edge of the border between North and South Korea. What an amazing experience and quite a workout!

It is amazing that everywhere you go in this area, is marked and truly covered with active landmines to deter any potential invasions from the north.

Next, we went to the observation post to view the scenic panorama between the two countries.  You can see the flag of the North.

And then shorter flag pole of the South.

And if you look carefully, and ignore all the sparrows, you can see both flags on the left and ride. These are close to the location where the sides infrequently meet with diplomatic purposes (known as JSA).

Next, we stopped at official train station that is used to occasionally allow people and goods to go back and forth between the two countries.

This is built near/using the “Freedom Bridge”

This is where prisoners of war returned and walked home from the north when the cease fire was approved by the two sides.

The day was a little rainy, but it made us feel like home. We stopped in for lunch in Insadong and checked out the art district of Seoul.

It was a pleasant and fun way to send a day in Seoul.