(reformatted from a previous blog – this occurred in 2009)

Upon landing, the security was incredible! Being an El Al plane, we were parked further out on the Tarmac that the rest of the planes, and there were Egyptian military personnel with AK-47s at all four corners of the plane, plus an armored vehicle with a spotlight on top. Having the visas beforehand turned out to be a major time-saver; we waltzed right through immigration. Insight Tours picked us up at the airport and took us to our hotel, the Conrad Cairo; which turned out to be very nice, with high quality rooms and impeccable service. There was always someone somewhere cleaning or polishing, and everyone wanted to know if they could do anything to assist you. The air conditioning in our room was not quite cold enough, and they send someone up in 5 minutes to clean the filter and check the thermostat. Also, at turndown service the first night you are presented with a menu of 8 pillow choices for your ultimate comfort!

Because El Al only has two flights a week to Egypt, we had to arrive two days early for our tour. We booked a local tour guide to give us some local flavor while we were waiting (and because it’s difficult to leave the hotel in Cairo on foot to explore.) Our guide, Emad, picked us up the next morning after an excellent late buffet breakfast at the Conrad. In addition to being a licensed tour guide (requiring a huge amount of schooling in Egypt!) he doubled as our bodyguard (which is what he did while he was going to school.) He took us to see the City of the Dead, and to see how papyrus and the local essential fragrance oils are made. Of course, we couldn’t resist buying a little something each place even though he assured us we were under no obligation

Upon returning to the hotel, we changed into nicer duds and headed to dinner at the buffet (excellent, again) and then to the casino in the basement for a few hours of fun.

The following day Emad picked up to go to the local market to try our bargaining skills. It is right next to the mosque of the grandson of the prophet Muhammad. Before the market we visited another famous mosque that is a school for the teaching of Islam. Emad said that many of the world’s famous imams and clerics have passed through there. 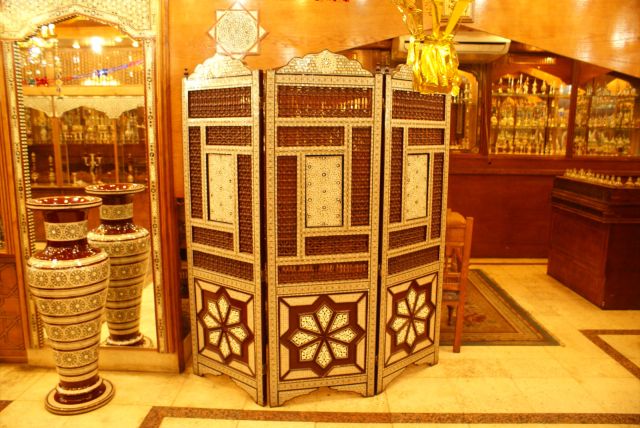 Afterwards we went for a drive into the countryside to visit a government-funded school where they teach young children to make carpets for a daily wage (after regular school is done for the day.) It was a bit sad to see children working instead of outside playing; but Egypt has no welfare-type programs, so the kids that aren’t in the carpet schools are usually out in the streets selling trinkets to supplement the family income. One carpet can take as long as 6 months to make! 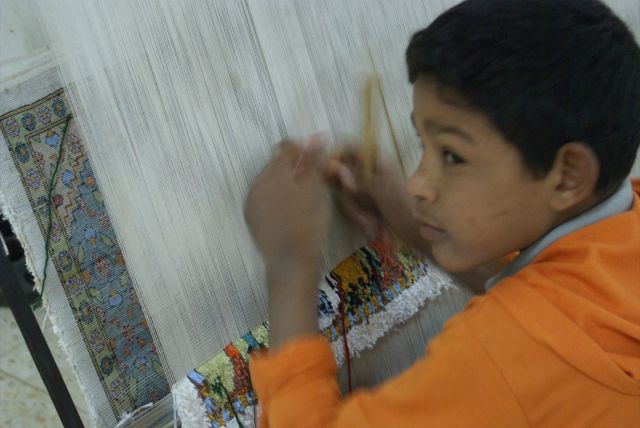 Our next stop (and the true destination of the day – Emad was very good at breaking up the drive with interesting breaks to stretch our legs and wallet) was Dashur, to see the first pyramids of the trip. It’s not a big tourist destination like the sites we were slated to see on our main tour, so it’s really amazing to see the pyramids rise up out of the desert with no tour buses or buildings around. 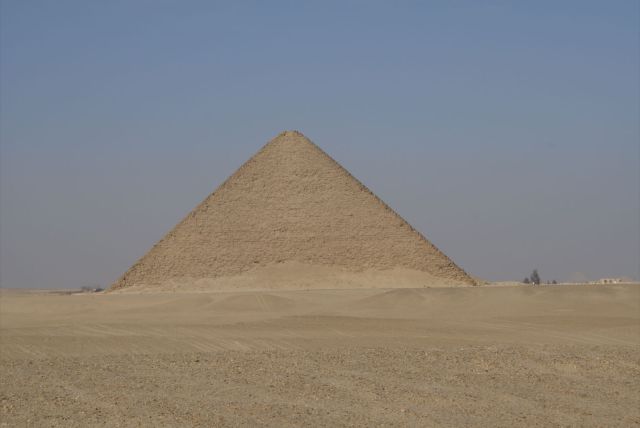 We went inside the Red Pyramid, which was neat, but really difficult. The shaft is only 1.5 meters high (so that you are required to “bow” before the king), 65 meters long, and descends at a really steep angle:

The Tourism Police ride camels on the job – they really are the most efficient form of desert transportation! 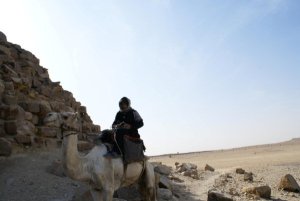 After all that exercise, it was time for a late lunch. Emad took us to a charming restaurant/circus/oasis/farm nearby. The meat was cooked on a little grill on the table: