Running in the Snow

OK – it is the annual snowmageddon in the Seattle area!

That pretty much means that there is no travelling this weekend.  Some people do not listen and as always think that if they own an SUV, they can handle snow much more easily than a regular car.  This one eventually gave up and backed down the hill once they realized that front wheel drive is not the same as true “all wheel drive”. 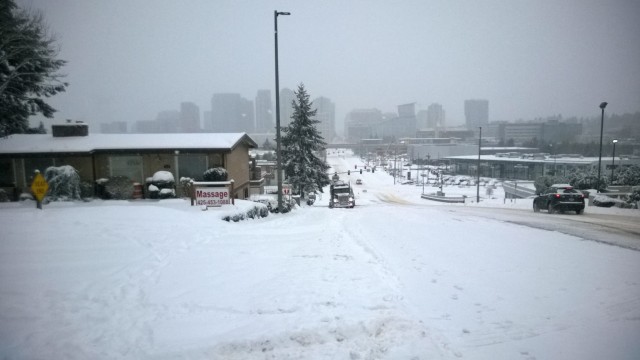 This trucker somehow had the illusion that they could go up a steep hill in 10 inches of snow as long as they built up speed and went faster.  Then they slid down and then got caught on the sidewalk curb and blocked all traffic in that direction.

OK – let’s talk about running in the snow! It is actually quite fun and a great workout.

One of my favorite snow runs was in Antarctica a few years ago.  I still have and use some of the same gear.  I also ran approximately the same distance – 5K in both cases.  When the snow gets deep (like today), it is a much harder workout.  You have to lift your knees higher and you have much more friction on the leg motion as the shoes drag in the snow.  The general rule of thumb I have found is that you will slow down approximately 1.5 minutes per mile from your normal running pace.

Let’s talk about gear.  I highly recommend Gore-Tex shoes.  They will surprisingly keep your feet dry and repel the snow quite well.  Myself, I prefer the Brooks Cascadia GTX.  I also recommend thick wool running socks.  They help to keep the snow from melting into your shoes and they keep your toes warm.

I know this is debatable, but there is the philosophy of do you run in other people’s tracks or do you blaze your own trail and only step in fresh snow?  It depends on your goal.  If you want a harder workout, the fresh trail will generate much more friction and require more energy to lift your shoes on each step.  Finding another runner’s trail and stepping in their indents in the snow will enable you to go much faster and not require as much energy to cover the distance.

Hint: bring a smartphone with a camera.  I still use my Lumia 820 running Windows Mobile.  It still supports podcast downloads, takes good pictures and is small enough to carry in my running belt.

Last, but not least, running around the world is always fun.  Some of my other favorite spots:

This entry was posted in Running and tagged blog, Running, Seattle, Snowmageddon. Bookmark the permalink.

1 Response to Running in the Snow