Just in case you missed the start of the safari tour, I recommend you start here.  Now, this day was VERY interesting!

We left Kruger National Park and headed out on a 1 hour drive to another private game reserve.  These roads are SLOW going and very bumpy even in a Land Cruiser.

I will try to tell a story of some of the things we did the past 24 hours in Sabi Sabi game reserve.

When you arrive, you fall in love with the place as there is a watering spot right in front of the lodge and restaurant.

I know the African (water) buffalo is not that interesting or rare, but check out this very rare female with horns that are wrapping around her head! 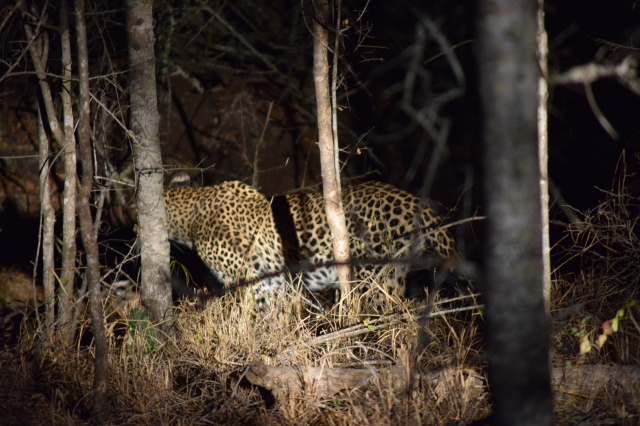 Now, last night was quite exciting…we chased down and found a leopard in the middle of the night and actually got a good photo before they snuck away.  We had to do some serious high speed 4×4 to catch this one!

If you think that was exciting, we started our morning today with running into an actual attempt by 3 lions to take down some older African buffaloes.  They were not successful, but we were right in the middle and able to catch the action.

The 3 lions were a little tired after that attempt so we stopped and offered them some tea to help recover and take a nap.

So, we moved on and decided to visit a group of white rhinos playing by the river.

They offered to even play a little so I took a short video to help make them famous.

We got the word that there was some more lions nearby, so we drove off for a little bit and see what they might be up to. They were 4 young male lions cruising through the area.

We followed them for a little while and then went and shared a cool drink with them at a nearby watering hole. An early morning water mimosa for everyone!

Here is the bartender when we arrived at this African safari bar, he was not amused with the rough crowd that walked in though!

And to close this one out since all the wildlife is playing today on video, I thought I would include some of the young local male elephants that were wrestling in the early morning sun to get ready for their WWF tryouts next week!

4 Responses to South Africa – rhinos, leopards and tigers oh my!