I am not sure how many people have seen the Netflix series about Eli Cohen titled “The Spy“, but it is highly recommended.   Eli is portrayed by Sacha Baron Cohen who was phenomenal IMHO …and no, do not worry, he is not like his Borat character in this series! 🤣

OK – what is the purpose of this book since this is a travel blog?  I wanted to share that you can actually visit and see of the history of Eli and his impact on Israel and Syria when visiting Israel.  First, plan some time to go up and visit the Golan Heights which I shared previously in this travel posting.

The Times of Israel had a nice posting on the footsteps of a spy that I wanted to try and explore a little myself when taking a day off in Israel with a friend.  It is about taking a drive and going up to the current and former border and viewing some of the Syrian outposts that explained in the movie.

It is recommended to try and visit most…because as you can see, most still have land mines or risk of land mines being in the area.  Caution, beware!  This is similar to the border between North and South Korea which I shared in this posting when I visited there a few years ago. 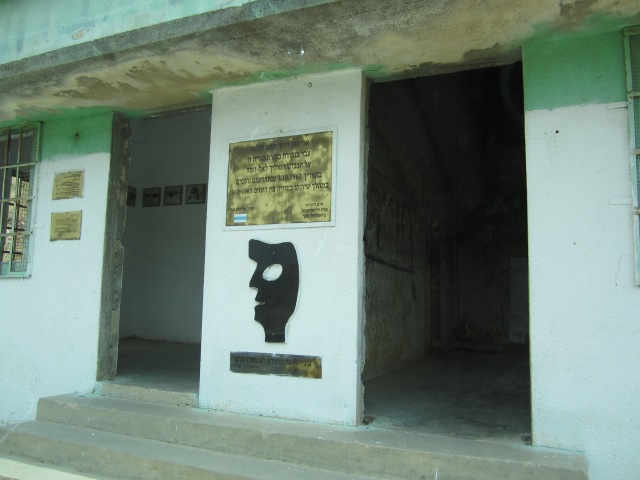 Once up in the Northeastern corner of the country, the important first stop is the former Syrian checkpoint that you can visit that was at the former border.

Inside, you can find some of the original history and pictures of Eli Cohen and his story.

I really do recommend watching the series and it will help you to understand his role and the commitment he made in his spy mission for the young state of Israel.  This is one of the pictures in the small memorial in the former roadside checkpoint.

The one highlight for me was the abandoned headquarters.  The former Syrian headquarters has a lot of history and Eli Cohen visited it first hand.  It is bombed out, but you can sense the history and see across the border when standing on top of it.

If you would like to learn more about the area or the Syrian border, check out my other posting of exploring the Golan Heights.