We stayed in Gurgaon which is closer to the airport and near many of the high tech call centers, etc. in India.  I snuck in one more run around a nearby park…the entertainment was all about the dogs tangling with the wild pigs.  I think the pigs won.

When I got back to the hotel, another (Indian) was coming back from the hotel gym.  He asked me if it was safe to run India any more.  I educated him positively.

On the last day we all visited the tallest minaret in the world.  This was erected in the 12th century and was a long time before the Mughul emperors.  The oldest mosque in India is also at this site, but it is no longer used.

The mosque and minaret were built from the plethora of Hindu temples that previously existed here. 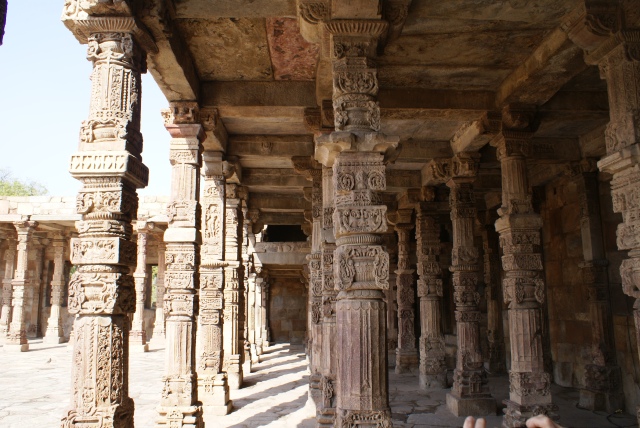 You can see the Hindu symbols, sculptures and carvings in the stones and pillars that comprise the minaret and mosque.

We missed some of these sites earlier due to the road closures for Republic Day, etc. when we first arrived in New Delhi.

One example was a close up shot of the India Gate. 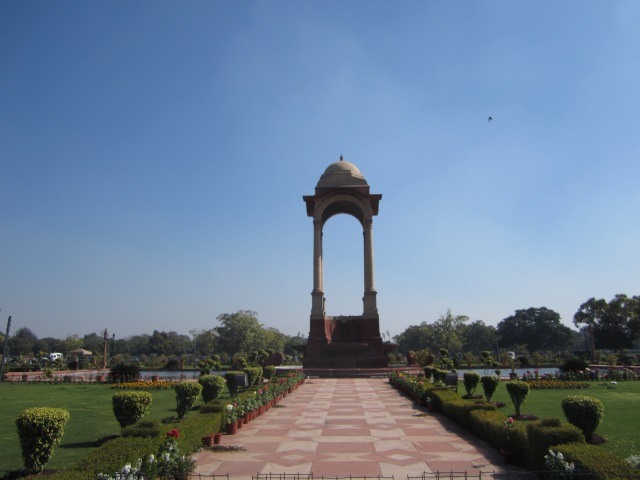 Later in the morning, we visited the archeological museum and the national museum.

The archeological museum was similar to the observatories that we saw in Jaipur I believe.  Nice outdoor park to visit in the diplomatic area of New Delhi.

A real highlight which was not in our tour was our second stop was the National Museum.  We could not take any pictures, but we really learned a lot more about how old the history is for India.  As Americans, we learn a lot about Egypt, Greece, the Romans, etc. – but there is some much older history in India that we know very little about in the US educational system.  We saw pottery and tools, necklaces, etc. that were over 4,000 – 5,000 years old.  Many centuries before the Romans and Egyptians.  It was also fascinating to see how the language has evolved and changed for any dialects over the centuries.  Lots of great exhibits and artwork to see here – and it is only 300 rupees ($6 to visit).

Although there is a lot of renovation underway, we visited the National Zoological Park.  We had to educate our driver on the word “zoo” and then we finally made it there.  There was some nice exhibits if some different monkeys, etc. which we had never seen before.

Never saw this before…parrots digging into the ground.

Overall, it was a nice way to spend the afternoon before heading out on a flight.  The only challenge is that we had to keep refusing our driver to take us to a bazaar, emporium, shopping.  It got old, but we are already used to being a tourist in India  :-)