This afternoon, we did a little window shopping and sightseeing in the old city part of Warsaw.  Very pleasant area of the city with many cafes and places scooping out gallons of ice cream on the warm spring day.

We took a diversion down a side street to check out some loud music and a local band was setting up.  Great sound and beat…too bad we did not understand Polish.  Did you know that Polish is the second hardest language to learn after Hungarian?

They seem to be setting up for all the protesters forming out in the streets based on how many beer stands they were setting up.

Our main goal was to visit the Polish Army Museum that was next to the National Museum.

Some (old) and (worn) pieces from the days when Poland was part of the former eastern block nations aligned with the Soviet Union. 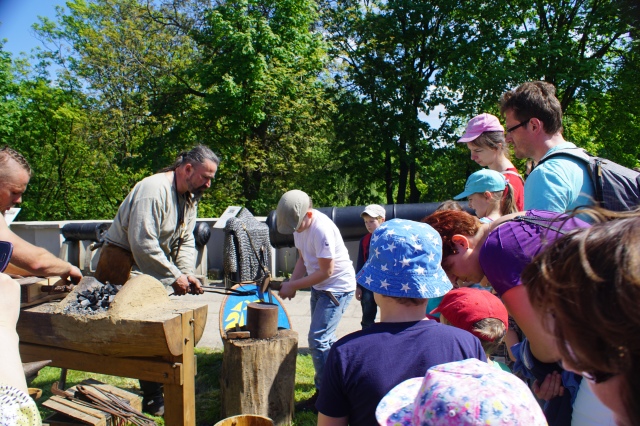 They also had a middle ages festival going on to teach kids how to make weapons and sword fight.

The highlight of the day was the open invitation to participate in the massive anti-government protest filling the streets of Warsaw.  We joined in, but was not sure what we chanting and yelling about.

We were in the news: http://bigstory.ap.org/article/f57f61fe77b24fa482b13a70a4c8cd29/poles-hold-large-anti-government-protest-favor-eu